While at the 2019 TKO Tread School, our group of 12 worked on the Hunchback Mountain Trail in the Salmon-Huckleberry Wilderness. This trail suffered damage in September 2018 when a mule team used the trail. In addition, the trail had had minimal formal trail maintenance in recent years. Our trail party included Kris from the Forest Service (USFS) with his professional trail crew perspective. 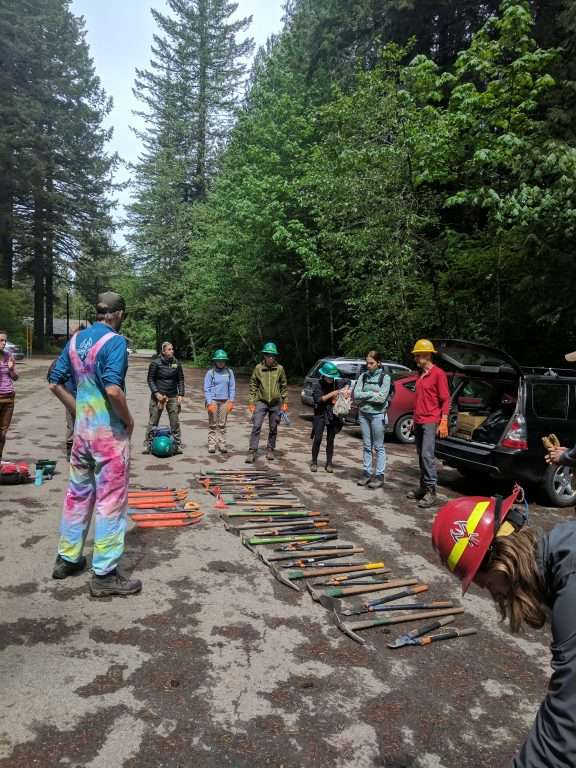 Caption: Michael, assistant crew leader, at the trailhead showing the trail party all the TKO tools and their safety aspects. (Photo by Glen Hess)

After we arrived at the trailhead, we had the tool and safety talk. The team also learned the core TKO values on a trail party: 1. Safety 2. Fun 3. Getting work done. Chip and Michael were our crew leaders. We had plenty of pick mattocks and loppers.

As we hiked along, Chip talked about possible trail fixes (using his “trail eyes” in TKO’s language), the tools needed, and the plan for that day. In fact, Chip had scouted the trail earlier in the week to determine what our trail party might accomplish. 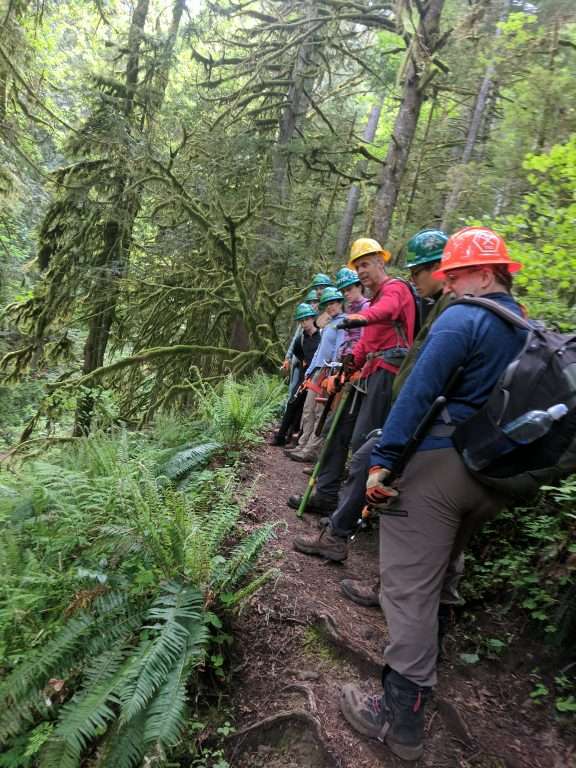 Crew Leader Chip describing possible trail fixes, the tools needed, and the plan for the day. (Photo by Glen Hess)

Chip had singled out a trail segment that had become severely outsloped and narrow. After we arrived at the work site, we split into six-person groups for safety and spread out along the trail. We learned how the trail had slid downhill since the last time it had been grubbed. To fix the problem, the crew used pick mattocks to pull all that sloughed duff and earth back. 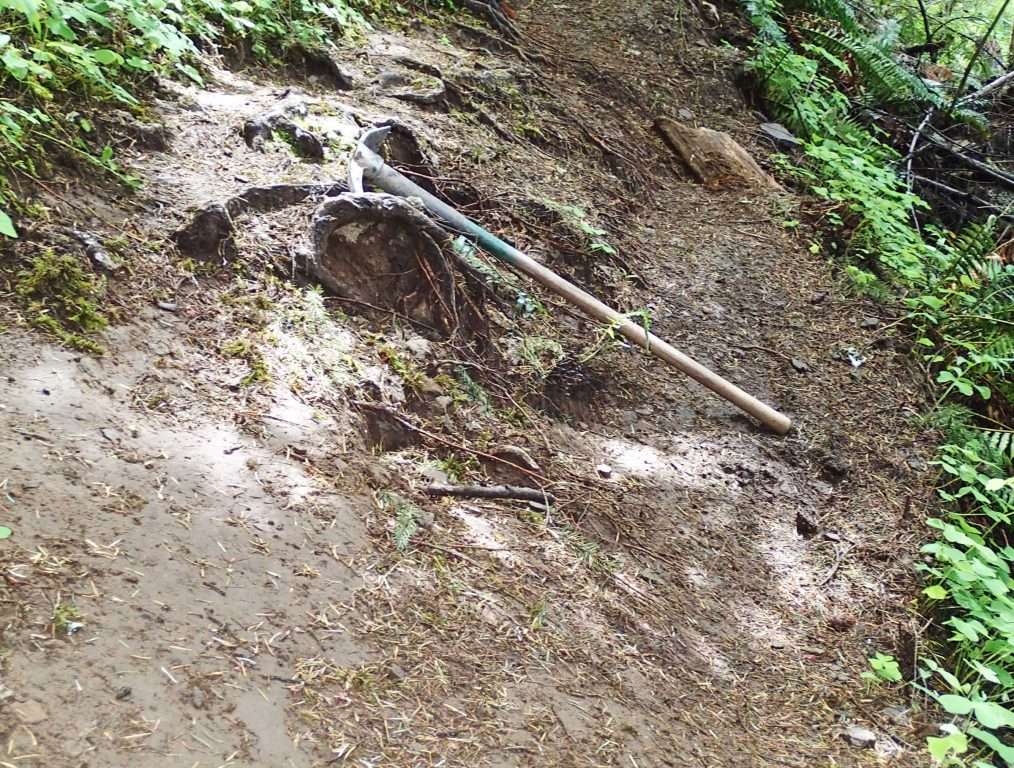 Showing the Hunchback Mountain Trail width and slumping problem with a pick mattock as scale. (Photo by Chip Andrus) 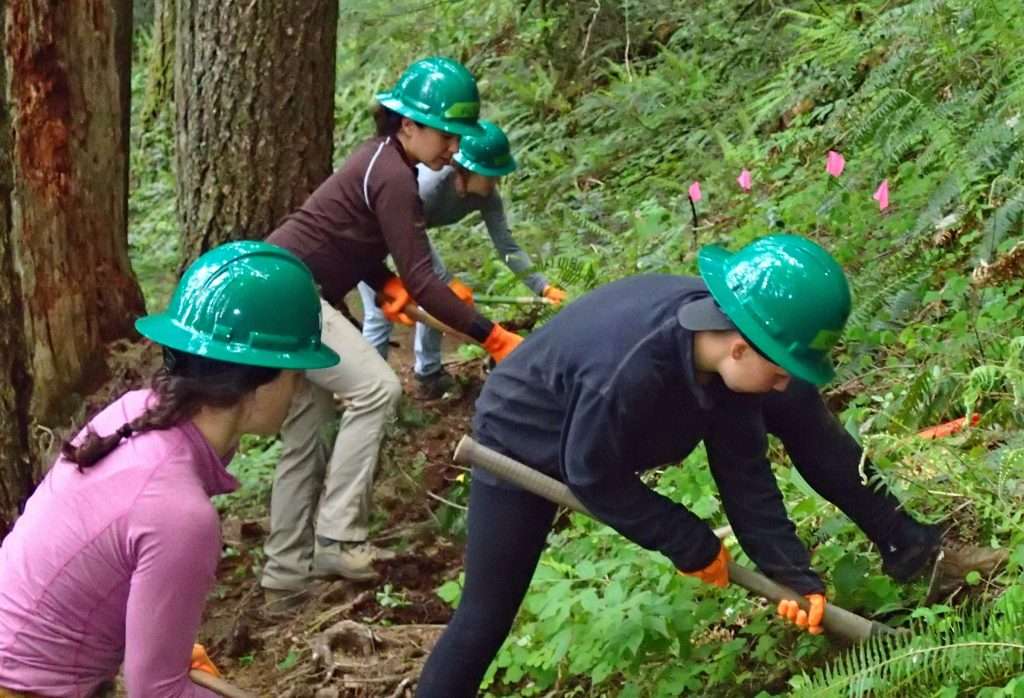 The soil had very few rocks and was easy digging. We also lopped at the Oregon grape and vine maple that had encroached on the trail. There were standing snags of old cedar and Douglas fir from a forest fire in the 1920s. We found the charcoal layer left behind almost a century ago about six inches under the existing duff and soil. Our crew unearthed a northwestern salamander and were awed when we found a Pacific giant salamander in the thick duff. For many it was the largest salamander they had ever seen (about two inches in diameter). We put it back into its habitat above the area. 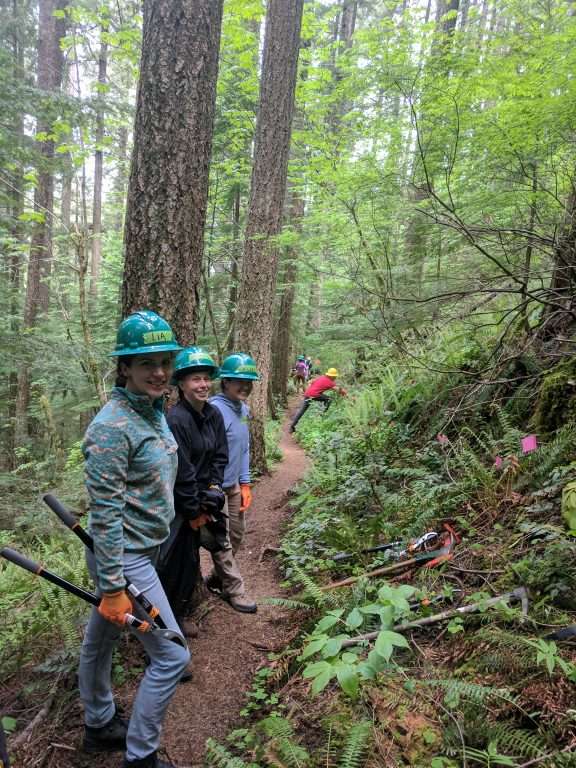 Volunteers standing next to a section of trail before restoration. (Photo by Glen Hess)

Mindful of our safety, we stayed aware of the other trail crew of six above us in case of rock fall. As we worked, we talked about each other’s trail experiences and other TKO trail parties. Some of us also took before and after photos of the trail sections where we focused our efforts. 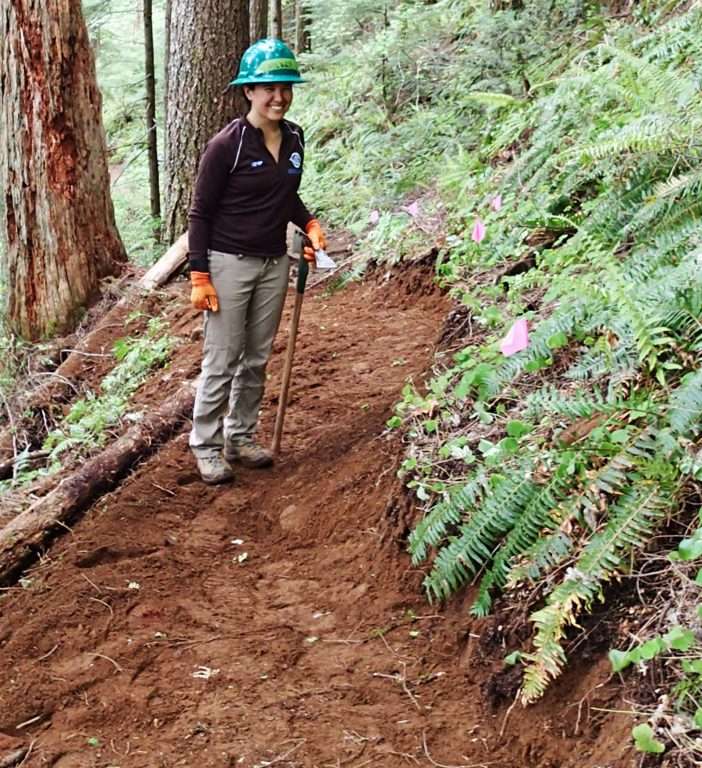 Hilary standing next to an immovable rock shield that made the trail less than 12 inches wide. (Photo by Chip Andrus)

At another site, we came across an immovable rock shield that made the trail less than 12 inches wide, which was even less than the standard 16 inches width for wilderness trails. The group thought about alternatives (rock walls, moving the trail, and a log crib). We decided to harvest a dead cedar tree to build a log crib to shore up the area. Our crew learned that cedar is the best log to use as cribbing in this area because it rots more slowly. We were told that Douglas fir rots much more quickly. 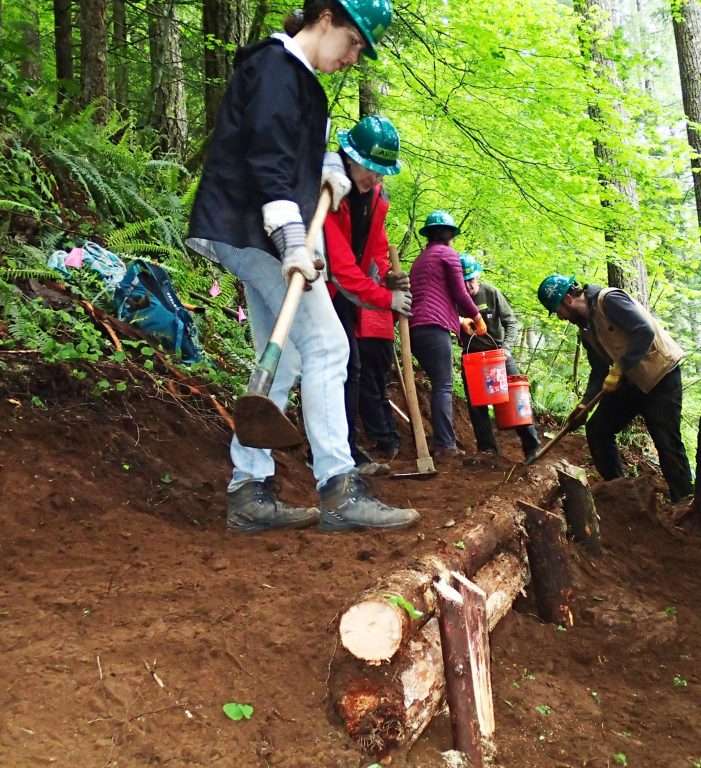 Working on a log crib. (Photo by Chip Andrus)

At the end of the day, as the group walked back to the trailhead in a light drizzle, we noticed how much work we had done in clearing the trail. We had learned that on switchbacks you need a platform for hikers and that the ends of the switchback get degraded over time. We also now saw places that could be worked on the next time a crew returned to the Hunchback Mountain Trail and felt confident about recognizing why a trail segment becomes severely outsloped and skinny. Now everyone readily knows how to fix it. Our experience with rebuilding these highly degraded segments will make other trail maintenance jobs seem tame to us.

Chip later said he was fortunate to have a crew like ours to lead around the forest on a Saturday and come up with ways to fix our neglected trail. He praised our enthusiasm, good cheer, and quick grasp of conditions, all of which made the day’s task easier for a crew leader. He thanked us for making it such a productive day. 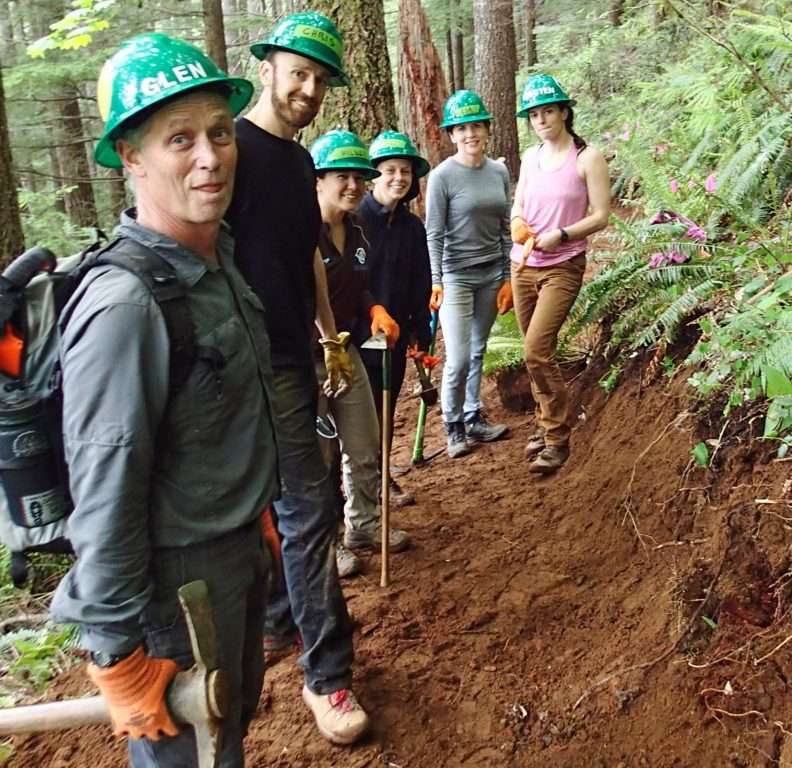 All smiles after completing a section of trail restoration. (Photo by Chip Andrus)