Hike of the Month: Fort to Sea Trail

The National Park Service’s Fort to Sea Trail, accessible at all times of the year, follows a route that members of Lewis and Clark’s Corps of Discovery might have taken in order to commute to the Pacific Ocean. The trail was finally completed in 2005, just in time for the Lewis and Clark bicentennial celebration. Much of the trail lies within the Lewis and Clark National Historical Park, which includes Sunset Beach State Recreation Site. The trail can be hiked from either end (no fee at Sunset Beach; $10 pass at Fort Clatsop), and a partial loop is possible using the Kwis Kwis Trail on the Fort Clatsop end. Hikers will experience dark woods of Sitka spruce, sedge wetlands, cow pastures in the Clatsop Plains, and views up and down the sweeping 16-mile stretch of beach that extends from the mouth of the Columbia to the Necanicum River. 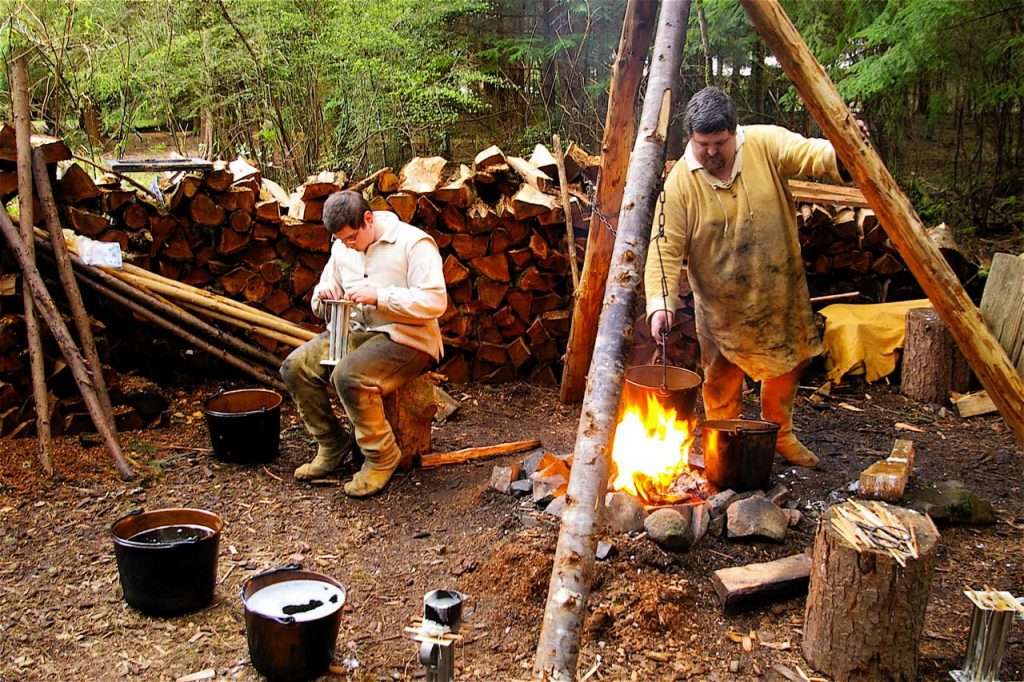 The Corps of Discovery camped at Fort Clatsop during the winter of 1805-06, bemoaning the boredom, the diet of elk (over 100 killed), and the incessant rain (only 12 rain-free days). Lice and fleas infested the camp and, while relations with the local Chinook were friendly, the Indians drove a “hard bargain” and severely depleted the Corps’ stock of trade goods. The men spent the winter preparing for the long voyage back across the continent, and a detail was sent to the beach – the site is actually in Seaside – to manufacture salt from ocean water. Lewis and Clark themselves reviewed their journals, and Clark meticulously drew detailed maps from his notes. The explorers handed over the fort to Chief Concomly, but the entire palisade of cabins had rotted away by the mid-19th century. The model fort now on display is only 15 years old and was more meticulously planned than previous renditions, the copy carefully constructed from Clark’s sketches. 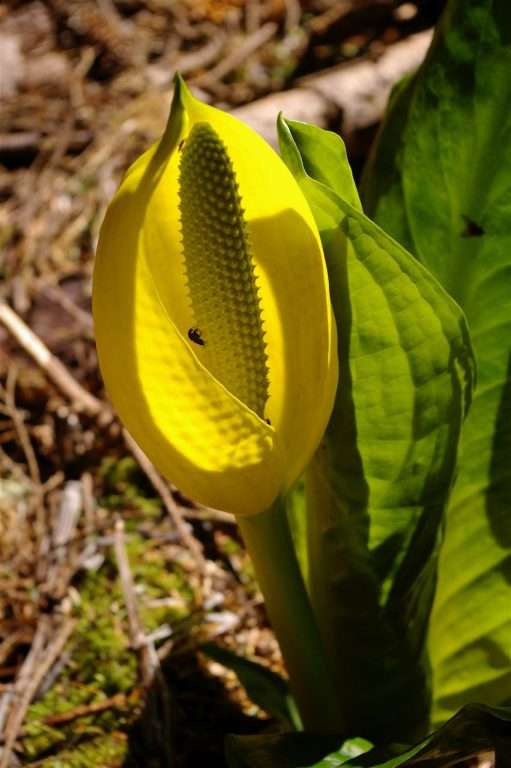 The central section of the Fort to Sea Trail borders a stretch of wetlands between Clatsop Ridge and the Skipanon River. By February, skunk cabbage is beginning to bloom in the marshlands and lending its distinctive pungent odor to the landscape. Both the bright yellow color of the spathe and the fetid smell attract the small flying rove beetles (family Staphylinidae) who serve as the plant’s pollinators. The beetles can be seen on the tiny flowers that stud the central four-inch spike, or spadix. The skunk cabbage’s bright green floppy leaves are the largest of any Pacific Northwest native. Skunk cabbage is a thermogenic plant, with the flower buds using cellular respiration to create a heating system within the spathe that may be 35 degrees above the surrounding air temperature. 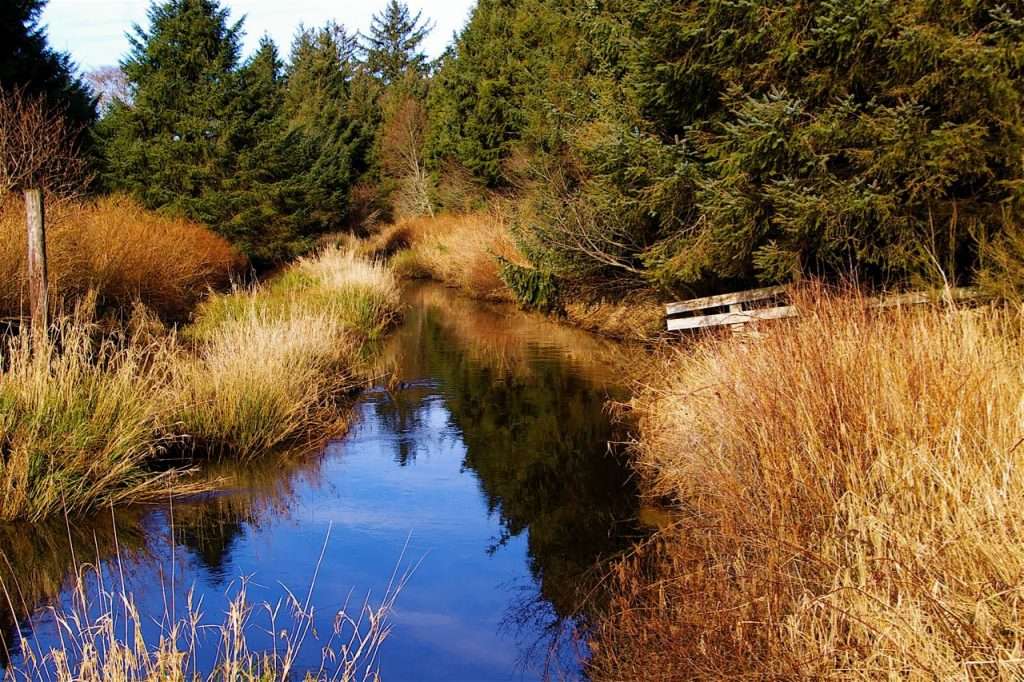 View of the Skipanon River from a footbridge on the Fort to Sea Trail. (Photo by John Sparks)

The Skipanon River follows a lazy six-mile course north from Cullaby Lake to enter Youngs Bay at Warrenton. For most of its course, the river is at sea level and only about a mile and a half from the Pacific Ocean, from which it is separated by the low rolling ridges of former sand dunes. The connection between the lake, named after a supposed descendant of a member of the Corps of Discovery who had dalliance with a local Chinook woman, and the river is artificial. Cullaby Lake originally drained into Neacoxie Creek, but shifting sands blocked that route and settlers drained the lake northward. The Skipanon is the westernmost tributary of the Columbia River on the Oregon side. The North Coast Watershed Association has been active in proposing removal of flood gate structures lower on the river that impede upstream progress of spawning coho, cutthroat trout, and lamprey. 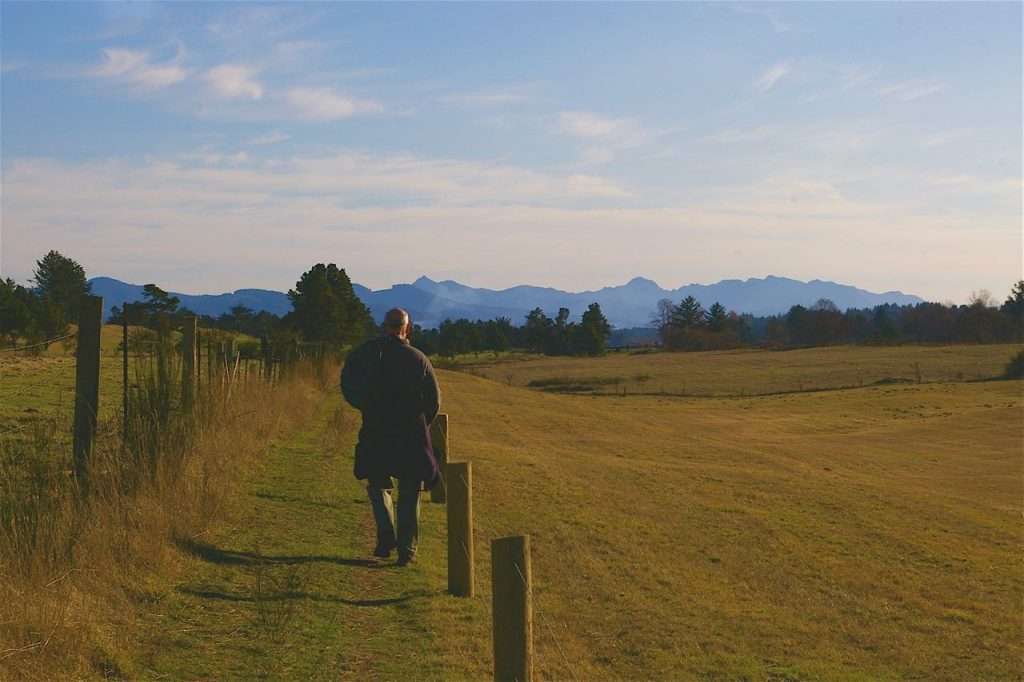 A hiker strolls along the Fort to Sea Trail where it crosses private land on the Clatsop Plains, with Saddle Mountain in the distance. (Photo by John Sparks)

Between Highway 101 and Sunset Beach State Recreation Site, the Fort to Sea Trail crosses the rolling pastures of the Clatsop Plains south of the Oregon National Guard’s Camp Rilea. Hikers need to stay on the route here, where kissing gates take you from one field to the next and dairy cows languidly masticate their cuds and stare you down. (The elk are shier and will trot off at your approach.) The trail passes a Presbyterian church near the highway. The current building stands on the site of the first church built west of the Rocky Mountains in 1846. Hikers cross Neacoxie (Sunset) Lake, one of several longitudinal interdune lakes in the plains, on a sturdy footbridge. The landscape here is less than 1,400 years old as the beach slowly migrated 5 ½ miles westward from the former coastline at Astoria. Each low north-south ridge represents the foredunes of a former beach. The rolling sandy expanse has been stabilized over the course of the past 150 years with vegetation planted by white settlers.

See the Fort to Sea Hike in the Oregon Hikers Field Guide for more details and trailhead information.